This hybrid package, produced on unique converting equipment, has a small footprint in distribution and on shelf, yet its billboard graphic impact is irresistible to consumers. 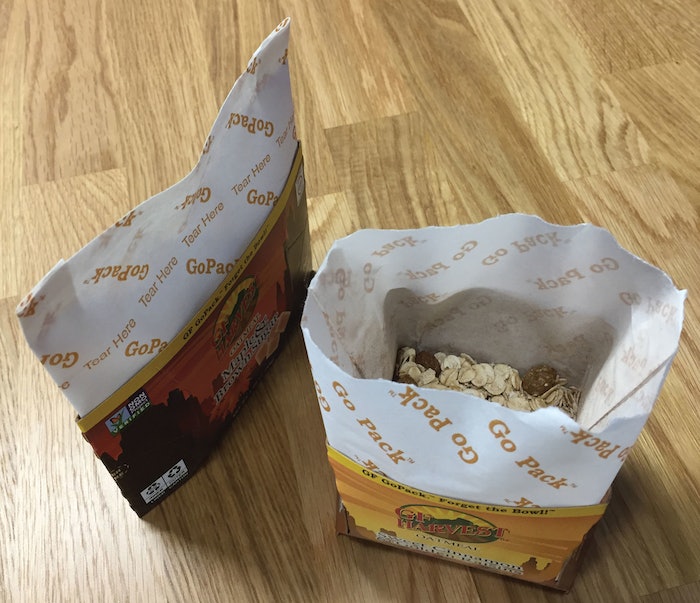 In its collapsed state (left), the GoPack is slender enough to fit easily into brief case or purse. But when popped open (right), the package becomes a squared-off bowl.

GF Harvest LLC, a maker of gluten-free oatmeal and oat products, is the first to commercialize a collapsible cup uniquely suitable for on-the-go consumers who crave portability and convenience. Consumers can easily tuck the slim pack in purse or brief case. When it’s time for breakfast, just pinch the left and right sides toward the middle and, thanks to clever scoring and die cutting, the paper package turns itself into a squared-off bowl. Just add hot water and stir. Microwaving isn’t really necessary, but for those who prefer oatmeal that’s really hot, instructions are included on the package.

Based in Powell, WY, GF Harvest has trademarked the GoPack™ name it came up with to describe the concept. And though sales thus far have been primarily through e-commerce channels, company president Seaton Smith would like nothing more than to see the GoPack concept on retail supermarket shelves, too.

Essentially a hybrid package consisting of one flexible material (paper) and one rigid material (paperboard), the GF Harvest package was developed by Graphic Packaging International. The GoPack is born out of GPI’s IntegraFlex™ technology in a collapsible cup design that is part of GPI’s broader hybrid platform where the common denominator is finding ways to marry the advantages of flexible packaging materials with those of more rigid packaging materials.

Smith says he saw the concept at a PACK EXPO a few years back and knew immediately that he wanted it in place of the round paperboard cups he had been using. Round cups with dry product inside and topped with a flexible film lidding material were functional enough, he points out. But from any sort of cube or space utilization perspective, they were suboptimal to say the least. Not only because a round package doesn’t cube out well, but also because the container needs to be designed with a considerable amount of head space between the dry product and the lid. Inherent in such a design is the need to ship a lot of air.

These shortcomings are squarely addressed by the GoPack. Measuring about 5 x 5 in, the GoPack facing is a perfect square. But it’s only 1 in deep because it’s shipped, distributed, and merchandised in a collapsed state. Only when the consumer is ready to eat the product inside does the package turn into a squared-off bowl that is a little more than 3 in deep. This means that GF Harvest is able to put eight packages in a corrugated retail-ready case measuring just 6 in high, 6 in tall, and 11 in deep. It’s a fraction of the space occupied by eight round cups.

“Compared to a round cup, the IntegraFlex collapsible cup offers an enhanced billboard, a more visible shelf orientation, and, most important, more product on the shelf,” says Kevin Jannusch, Market Development Manager at GPI. “It also means far more empty packages fit on a pallet coming into the GF Harvest plant or on full pallets leaving the plant.”

As a relatively small firm whose volume requirements are modest, GF Harvest fills the cups semiautomatically. “The knocked-down flat packages arrive in cases of 250,” says Smith. “An operator picks them out one at a time and pinches each one slightly to open the top enough for product to drop in from a volumetric filler. Then it goes through a band sealer and then into the retail-ready case. Cases go through a taping machine then onto a pallet for shipment.”

The back story
GPI’s hybrid packaging portfolio includes multiple technologies, such as IntegraFlex™ and IntegraPak™. “IntegraPak has been around for some time, in a fully enclosed, lined carton format,” says Tarlton. He points to the foil-lined carton that GPI makes for Frito-Lay’s Cracker Jack product. “We put that liner in the carton before it ships to Frito-Lay, and there it’s run on filling equipment that erects the carton, seals the bottom, fills the carton, and then seals the top,” says Tarlton.

Much more recently launched in a package that is part of the GPI hybrid packaging platform—coincidentally it’s also a Frito-Lay brand—is the line of Doritos Crunch Nuts and Crunch Mix products (pwgo.to/3679). “The fully enclosed, lined carton, designed in the shape of a prism, was inspired by the shape of the chip,” notes Tarlton. “High barrier characteristics of the gas-flushed, foil-lined carton extend the shelf life of the snacks.”

GF Harvest’s GoPack is housed in GPI’s IntegraFlex™ Collapsible Cup, which is the latest evolution of the hybrid packaging line. Both solutions integrate a flexible and rigid material, but IntegraFlex is partially closed, while its predecessor, IntegraPak, is fully enclosed. While precise details on how the GF Harvest package is made are not available, it begins with 28-lb unbleached paper that gets flexo printing in one color plus a barrier coating. This coated material is then formed into a continuous tube with a fin seal. It’s this tube of coated paper that gets married to—in GF Harvest’s case—the sheet-fed 18-pt paperboard, which GPI prints in up to eight colors on an offset press. GPI’s unique laminating and converting capability allows for the registration on the printed tube to the printed band in continuous motion.

As for the film-wrapped spoon from EcoTensil—it’s made of paper rather than plastic to score sustainability points—it represents a new development for the hybrid platform. “We were able to integrate a machine that draws bandolier-fed wrapped spoons from the case in which they arrive,” says Tarlton. “During the converting process we insert the spoon between the rigid and flexible elements of the package. All the consumer has to do is pull it off and put it to use.”

GPI’s Tarlton acknowledges that the IntegraFlex concept was introduced as a developmental pack format at PACK EXPO in 2015. GF Harvest’s gluten-free oatmeal was introduced commercially in the Spring of 2016 at the Natural Products Expo. Since that time, several other IntegraFlex applications have been commercialized. Disruptive packaging innovation requires nimble and capable early adopters to pioneer new technologies, which is exactly what GF Harvest did to differentiate their brand. Worth noting is that GF Harvest has added a second product category, a microwavable muffin.

“We’re grateful to GF Harvest,” says Tarlton. “When you get a brand like that, where ownership says yes, I love that idea, it can change the whole category.”

GF Harvest’s Smith says the single-serve packs sell for about $2.25 each. As for the economics of the new package, GPI says that the number of packages being purchased is important. “But once we get volumes to a certain level, we can offer this format at parity relative to other alternatives,” says Tarlton.