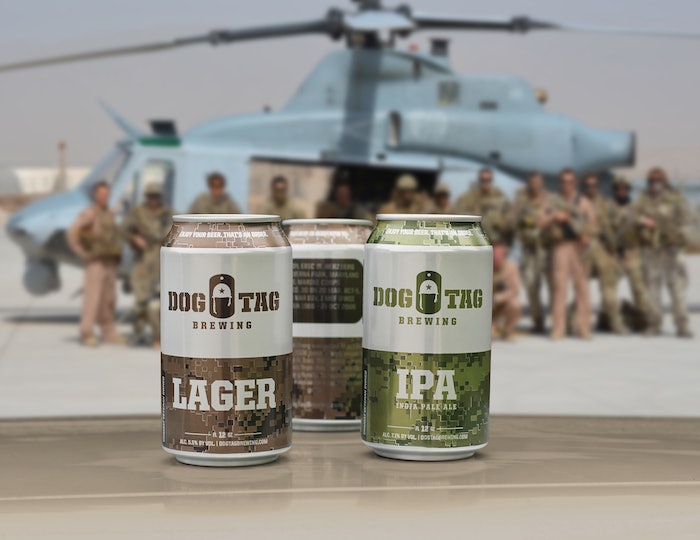 With a tagline of “Enjoy your beer. That’s an order,” Dog Tag Brewing was created to provide quality beers that deliver a message of gratitude for the selfless sacrifice of the nation’s military. The company works with families who have lost a loved one in the line of duty and details their personalized stories on its beer cans. In addition, a portion of its proceeds from sales gets donated to organizations selected by each family to individually honor their fallen hero.

Dog Tag Brewing turned to Rexam to make this mission a reality. Using Rexam’s Standard Editions™ printing technology, different graphics can be produced on a single pallet of cans. As a result, the company can tell the story of 12 different fallen warriors on its IPA and lager product packaging. Both are packaged in 12-oz cans with a camouflage design.

Dog Tag Brewing uses a two-piece can. Both cans and ends are aluminum and supplied by Rexam. Minhas Craft Brewery in Monroe, WI, fills the cans and seams the tops on.

Rexam Editions technology produces different designs of the same label simultaneously on a single decorating line. Using the principle of the stencil, Rexam takes a standard printing blanket and laser-etches custom text or an image out of the blanket’s surface. Then, after the blanket is inked, a blank can proceeds across it as part of normal decorating operations. When it exits the decorator, the can will have a void of ink in the image of the stenciled blanket. By using multiple images on different blankets at the same time, Rexam creates a series of cans featuring different art.

“Our fallen warriors who have paid the ultimate sacrifice are not just nameless and faceless statistics, but great Americans with stories of courage and inspiration,” says Seth Jordan, U.S. Marine Corps veteran and President and founder of Dog Tag Brewing. “We wanted to create a product that would convey gratitude to those who have made the ultimate sacrifice and to the families they have left behind. We turned to Rexam and they have been fantastic from the beginning. Working closely with them, we were able to utilize their [Standard] Editions printing technology to bring this idea to fruition. The cans look great and are the perfect vessel for our beer and our message.”

Dog Tag Brewing chose aluminum cans for its brews because of the many advantages they deliver for beer including durability, complete protection from light and oxygen to preserve freshness and beverage integrity, and portability. Cans are often allowed in places where glass is not. They are also a sustainable beverage package, recycled at more than double the rate of any other beverage package.

Dog Tag beers are currently available at select retailers in Montana, Wyoming and Pennsylvania, with plans to expand nationwide.

As its website says, “Dog Tag Brewing is combat-veteran owned. We are profoundly grateful to our nation's military families and will ensure that their loved ones are not forgotten through our unique can design, community outreach and charitable giving. Please remember these great Americans, salute their sacrifice and enjoy our beer.”

Watch a video honoring America’s fallen heroes and the development of the Dog Tag Brewing here.