Adding a 'leg' to the corrugated industry stool

Packaging World Editor report on SuperCorr 2000, a late October show and conference in Atlanta sponsored by a paper Expo association and an organization of corrugated converters.

How would a bulk display of boxes exuding the smell of chocolate enhance the sales of individual cartons of chocolate candies?

Would makers of integrated circuit boards like to locate corrugated boxes that were treated to have static dissipative properties?

Are you interested in being able to use radio-frequency identification tags in your shipping cases? Or find a way to economically use Electronic Article Surveillance labels inside your box?

If any of these topics interest you, you probably should have been at SuperCorr 2000, a late October show and conference in Atlanta sponsored by a paper Expo association and an organization of corrugated converters.

These subjects were just a few of those discussed by packagers at a meeting of the end-user committee of the Technical Assn. of the Pulp & Paper Industry during SuperCorr. Chaired by Eastman Kodak’s Andy Kerr, the committee plans to provide TAPPI with the kind of end-user input that will enable it to develop programs in line with the needs of the customers of its members.

Or as Kerr puts it, the end users provide the third leg of the corrugated business “stool,” because TAPPI already counts among its members representatives of both paper companies and corrugated converters. Helping Kerr build his committee was one of the reasons I spent a day at SuperCorr.

The whole concept of the involvement of all partners—especially the packagers—in helping a major association plan its strategies is one I’ve long endorsed. Last month in this column, I urged readers to become involved in the Packaging Machinery Manufacturers Institute Training and Accreditation program when it ramps up next year. I’d also like to see organizations of manufacturers promote PMMI’s training program, if not help to shape it.

Some years ago, I witnessed first-hand the input of packagers back when the PMMI had an active advisory committee on productivity, one that crafted surveys and held workshops about packaging productivity. People like Chuck Goodale of Anheuser-Busch, Tom McMurray from Warner Lambert and others gave freely of their counsel and their precious time. And obviously they convinced their companies to invest regularly in travel resources.

PMMI is now in the formative process of another group of end-user representatives, the Packaging Management Council, and down the road, we’ll see how this group’s advice affects PMMI.

Of course, there are substantial differences between PMMI and TAPPI. Companies are members of the former, while individuals make up the TAPPI membership. However, as an ad hoc committee, Kerr says his committee members are not required to be members of the national TAPPI organization. His committee will accept what he calls “card-carrying members of IoPP [the Institute of Packaging Professionals] or Women in Packaging.”

The concept of this participation is really quite simple. If corrugated boxmakers and papermakers are listening to their customers, the collective assets of their association can be directed into channels that represent the needs of their marketplace. The TAPPI end-user committee becomes what many manufacturers frequently use in developing products and packaging: the focus group. After all, how can a company or organization go wrong when it sets up a mechanism to give their customers a voice in helping to formulate the plans for a company?

As appealing as it sounds, Kerr didn’t find interest everywhere. He was shot down by Frito-Lay. “Yes, they said it sounded interesting,” he reports. “But corrugated was not a major part of what they did, and procurement was already nailed down.” Joining a TAPPI group may be a bit foreign to many end users. And frankly, as a show, SuperCorr was a far cry from the liveliness and excitement of a packaging machinery show.

Other topics that were covered at SuperCorr end-user meetings included the quality levels of incoming materials, standards on board grades and the wonderfully esoteric controversy of score-depth measurement vs bending-force measurement.

But if your company buys a lot of corrugated, and you’d like your wants and needs to be heard, I encourage you to talk with Andy (phone 716/588-5274, or e-mail: andrew.kerr@kodak.com). He has a definite idea about how sharing information can reap dividends for his company and maybe for yours, too. 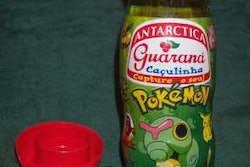 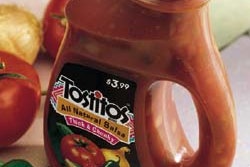 Getting a handle on salsa packaging