"Help me, help yourself," is the moral Evelyn Auld attributes to an unusual packaging change set in motion by an alert salesman. As the story goes, Roy Romisher, a West Coast salesman with Continental Plastics, was served chips and salsa in first class on a Reno Air flight. He liked the sauce but not the package, so he contacted the company, Mrs. Auld's Gourmet Foods of Reno. After six months of testing, the small specialty food packer converted to a 4-oz polypropylene jar that's topped by a 58-mm patented Clamp-Seal cap of high-density polyethylene. Both are injection-molded by Continental Plastics (Triadelphia, WV). They replaced a 1.5-oz glass jar that was sealed with a metal closure. This is how Romisher helped the food company and himself. For Mrs. Auld's, the new package is substantially less costly because the new jar and closure are both stock items from Continental. In addition, the new package weighs less. That's a benefit to the food company, but especially for Reno Air, which also likes the elimination of breakage. Finally, the 4-oz fill counters criticism that the 1.5-oz jar simply didn't provide enough sauce for the chips supplied. "Our chips and salsa are very popular," says Ed Heinonen, senior buyer for Reno Air. "We conducted a lot of tests and found that four ounces of salsa was an ideal quantity with a one-and-one-half-ounce bag of chips. "Our catering crews really like the fact they don't have to worry about breakage, a problem we had in the past with the glass jar. This package is simply easier to dispose of." The packaging improvement was one of the final projects of Evelyn's husband, Sam Auld, who was president of the food company until he died earlier this year. "Sam was an engineer who saw the potential savings in the plastic container, and he was instrumental in selling it to Reno Air," Evelyn remembers. The company also packs salsa in quart glass jars for sale through gift and gourmet shops. Converting from glass to PP wasn't as simple as it might sound. The food company worked with its local process consultant to help verify that the all-plastic container system would be able to deliver the same top-quality product that Mrs. Auld's offered in glass. In its plant, the food company hot-fills the product into the jars at a temperature of 200°F using relatively modest-volume equipment. The jar is molded with dual-lead threads that eases jar molding, while also simplifying cap application. "Mrs. Auld's production people like the dual-thread design because they always get a good seal," reports Romisher. The Clamp-Seal cap was originally designed by Continental for a company producing craft paints, says Continental's engineering manager Gary Mengeu. The closure has a channel molded into it that seals to both the inside and outside of the finish of the jar. Mengeu cautions: "Don't try this at home, unless you're using very tight tolerance injection-molded parts." While it did a good job in preventing leakers for the paint packer, Continental has found it provides an even better seal with a hot-filled product. "As the hot-filled sauce cools, a vacuum is pulled onto the closure," Mengeu explains. "Not only does the center of the closure dish downward, much like metal safety-button caps, but the inner cap channel is pulled tightly against the inside of the jar finish." The sauce jar holds a vacuum of 4" of mercury, he says. Once the cap is loosened and the vacuum is lost, Mengeu says it takes about four hours for the closure to return to its original flat shape. The Clamp-Seal, he says, may be the only linerless cap for foods that combines threads and the channel lock. Since this application worked so well, Continental has begun testing the combination for hot-fill juices. One of Sam Auld's specific contributions to the package is the unusual design of the jar label. Not only does the label identify the product and its maker in bright gold-tinted foil, it also provides tamper-evidence via a long tab that extends from the sidewall up over the cap shoulder to the top. Called a Safety Seal combination label, it is provided by Caselle Label (Sparks, NV). It's a 70# paper/foil lamination that's acrylic topcoated for printing. The stock is printed letterpress and die-cut. The labels are automatically applied by two machines in Mrs. Auld's production plant. "Salsa has turned into a good product for us," Evelyn Auld states. "We have a good business with Reno Air, and our ability to hold down costs with this container really helps. Plus the visibility we get on the airline seems to help our retail and mail-order sales, too." 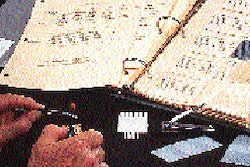 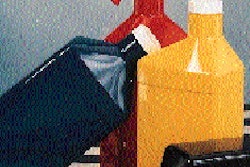 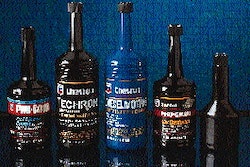 Bottles fuel use of recycled resin 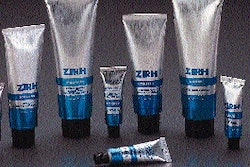