The process begins with gravure reverse-printed oriented polypropylene film in seven colors. The film is metallized, then extrusion-laminated to recycled board.

GPC's work on the Team Cheerios cereals was also recognized by the Gravure Assn. of America (Rochester, NY) with a 1998 Golden Cylinder Award. Earning honors in the packaging catetgory for film printing, GAA says the printing "captured not only the details of the product inside, but provided the fidelity necessary to incorporate numerous photographic images." Besides this pack, GPC also earned GAA awards for its work on a Sanhua cigarette pack, and for a Dare Blueberry Cheesecake cookie bag. 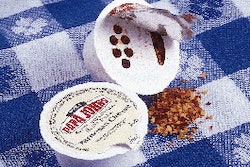