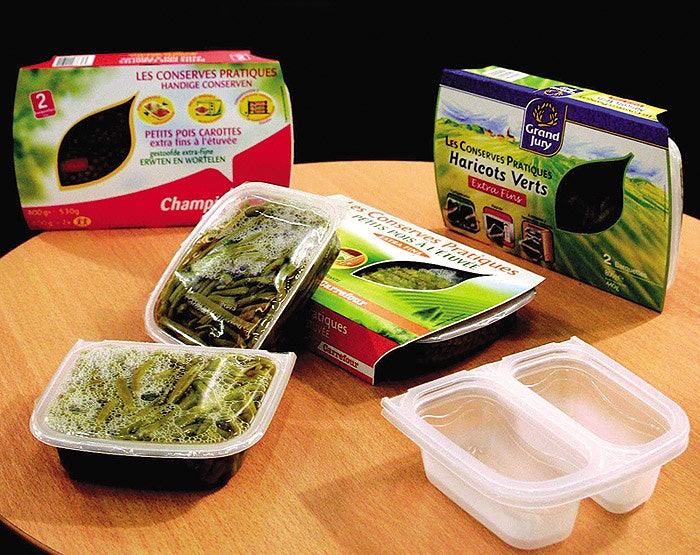 With packaging providing an ambient, nonrefrigerated shelf life of two years, a breakthrough new tray and lid combination is now presenting a serious challenge to the steel can for cooked vegetables.

The package was conceived by Luc Fevrier, category manager for preserved products at France-based retailer Carrefour, and the tray was produced by RPC Bebo UK. Lidding is supplied by LPF Flexible Packaging, and Gelagri Bretagne is the agricultural cooperative that packs the vegetables.

What makes the new packs so interesting is that Gelagri packs into either two- or four-compartment breakaway trays that are sold in a printed paperboard sleeve with a die-cut window to allow the shopper to see the food inside.

Fevrier initially contacted RPC Bebo in December 2002 to develop the new packaging. In November 2003, the French retailer tested two items in the pack in some 200-plus Carrefour stores. Called Conserves Pratiques, the new line is sold under the Carrefour brand in hypermarkets, Champion in supermarkets, and Grand Jury in local stores.

In Europe, canned vegetables are typically sold in groups of small individual or twin-serving cans, instead of the family-sized cans that are more prevalent in the United States. So, the economics of a single four- or two-compartment tray versus four metal cans makes the new package very competitive, regardless of filling speeds, says Mike Thomson, sales and marketing manager at RPC Bebo in Corby, England.

“Demographics in Europe are changing, with more and more singles and couples without children,” he says. “These types of households need only a single or double portion, rather than a family-sized package. So there is a definite trend toward smaller packages, while at the same time there is also a trend towards even larger packs. In general, packaging is moving toward the extremes in size.”

RPC Bebo thermoforms the Gelagri trays from a lamination of polypropylene/ethylene vinyl alcohol copolymer/PP. The company declined to be more specific about the thicknesses of each layer. “We’ve tinkered with the EVOH content to ensure the finished tray has a sufficient barrier to withstand the retorting, and to produce a shelf life of 24 months,” Thomson says.

The company also won’t divulge its process for adding the breakaway feature to the two-compartment or four-compartment trays, except to indicate that “it’s not perforating.” Thomson says that his company has several other projects in the works for processed vegetables in plastic barrier trays, but not in breakaway trays like the Carrefour products. “The tooling costs for this part of the project are extensive,” he says, “so the barrier to entry is substantial.”

Although all the vendors had to work closely together, according to Thomson, one of the keys was Gelagri’s use of two overpressure steam retorts from Surdry. It’s a retort that was specially developed for food products in plastic packaging, he points out.

“The retort uses a water- and steam-spray system to ensure the heating is even throughout the process,” Thomson says. “The overpressure is very tightly controlled, especially in the cooling phase.” That’s the tricky step when retorting plastic containers, he adds.

Another advantage is that the trays process faster than steel cans in the retort. “Even though plastic doesn’t have the heat conductivity of steel, the shape of the flat package offers more surface area, so the heat is more quickly dispersed,” Thomson points out. The shorter cook time also means the taste and texture of the vegetables are improved, as was verified by independent tests performed for the retailer.

The lidding film is a three-layer peelable laminate of SiOx-coated polyester/nylon/cast PP, according to Ron Harland of LPF in the Netherlands. “We developed this laminate for customers who want a transparent, high-barrier lidstock with easy-peel features for the consumer,” Harland says. “What we’re especially proud of is that this structure has a relatively wide heat-seal range.” Harland says his firm is also working on numerous similar projects around the world, saying “there is a definite swing away from tin cans to lightweight, consumer-friendly plastic packaging.”

The partners did look at radio-frequency sealing but discovered that heat sealing was the preferred method. One of Carrefour’s specifications for the package was its ability to have excellent sealability in a wide temperature range, according to Christian Claeys of Les Clés du développement, which represented Carrefour in the technical management of the project.

“Another specification was that the packaging can withstand thermal treatment at 127°C during 40 minutes,” says Claeys. “With these specifications, we have performance near that of glass containers, but without the rigidity.

“With these containers, we use temperatures of 125° or 127°C for a shorter time than others that autoclave at 121°C with semi-rigid containers for the same levels of sterility. Because they’re cooked for a shorter time, some vegetables like green beans have better texture and they remain more crunchy and more natural.”

Gelagri uses a two-step filling process, with a scale for the vegetables and a volumetric filler for the liquid.

When Fevrier conceived the packaging, he told his packaging partners that the goal was to create a line of products that could be priced the same as a similar number of steel cans. And like cans, the consumer could use one compartment and place the remainder in the cupboard for later use.

While the new trays add functionality in the microwave, a window in the paperboard overwrap sleeve provides visibility of the products that metal cans cannot. “Visibility to the consumer was an important element,” Thomson says. “That started with fruit packaging, but Carrefour felt it was also important for vegetables.”

The paperboard sleeve has copy that explains about the breakability of the trays and full instructions for reheating in the microwave in the package, or in a pot on the stove. “When we were first approached about producing a break-apart tray, there was a lot of skepticism about whether we could achieve what Fevrier wanted,” Thomson recalls. “It took us about 18 months, and the tooling design was quite a process. There was no small amount of investment, and that’s why the package is now in the process of being patented.”

“Conserves Pratiques represents a real breakthrough in providing a vegetable packaging concept that meets the convenience requirement of today’s consumer,” says a satisfied Fevrier of Carrefour. “The excellent cooperation of Carrefour and Gelagri Bretagne with RPC Bebo’s technological expertise has ensured that the concept reaches the shelves with a high standard of product protection and visual appeal.”