The UR10e from Universal Robots can now lift up to 12.5kg (27.55lbs)—a 25% increase over the previous version. In addition to being the longest-reach cobot from Universal Robots, this payload boost to the UR10e better positions it for applications such as palletizing, machine tending, and packaging. More specifically, the UR10e can now be used in palletizing applications with cartons weighing up to 10kg using a 2.5kg gripper. 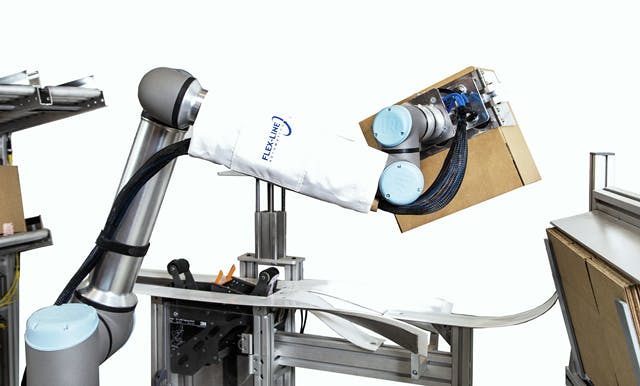 Flex-Line Automation’s box EZ, using the UR5e cobot, automates the tedious end-of-line tasks of folding boxes.The box EZ by Flex-Line Automation is also highlighted in Universal Robots’ exhibit. Powered by a UR5e cobot, this collaborative box erecting system can erect multiple sizes of boxes and automatically replace them in a queue so that users never run out of the box size they need. This step is key to optimizing end-of-line packaging tasks.

Agr International’s Gawis AF robotic handling system, in conjunction with the Gawis 4D measurement system, provides a solution for meeting both the need for comprehensive testing/measurement of bottles as well as a means to address throughput demands.
AGR International, Inc.
Sep 28th, 2021