Italian soap manufacturer Gruppo Desa expands into stand-up pouches for some of its liquid products using the first hf/f/s machine that combines intermittent and continuous motion.

Anne Marie Mohan
The LUX 24 is the first high-speed horizontal pouch machine to offer both intermittent and continuous motion in a single system for speeds to 230 pouches/min.

Gruppo Desa S.p.A., founded in 1908 under the name Soap-works Ambrogio Silva, is the parent company of three manufacturing and four commercial companies in Italy that produce and distribute detergent and soap products primarily in Italy and France. Its products include laundry detergents, fabric softeners, degreasers, and soap for personal care, marketed under the Chante Clair, Persavon, Quasar, Sauber, and Spuma di Sciampagna brand names. The group also produces private-label products.

Until recently, the only type of packaging Gruppo Desa used for its products was the traditional rigid container. But a desire to enter new markets, reduce packaging costs, and lessen its environmental footprint led the company to consider Doypack-style stand-up pouches.

“First of all, we are always looking for new sales opportunities, and we wanted to offer our domestic and European consumers products in fantastic, colorful pouches,” says Stefano Silva, a member of the Gruppo Desa board and COO of the group’s production companies. “A second important target that we wanted to reach with eco-friendly packaging is a reduction of cost. We are trying to achieve a 20-percent reduction in costs compared with a traditional bottle of equal weight. And third, as an ISO 14001-certified company, we are always looking for ways to reduce the ecological impact of our formulations and packaging.”

After evaluating four suppliers of filling equipment for the Doypack pouch, Gruppo Desa chose Ilapak Packaging Machinery, opting for its new LUX 24, the first high-speed horizontal pouch machine to offer both intermittent and continuous motion in a single system for speeds to 230 pouches/min (for 750-mL sizes with no spout).

“We believed that Ilapak had created something really new in the market, and we wanted to be part of this innovation,” says Silva. “In addition, our target speed was very high, and this machine was the only way we could achieve it.”

Innovation drives numerous benefits
In January 2015, Ilapak installed the LUX 24 at Gruppo Desa’s ITS-SISA Detergenti s.r.l. plant in Caravaggio, Bergamo, Italy. The plant is responsible for manufacturing and packaging liquid products under the Chante Clair and Spuma di Sciampagna brand names—marketed by Realchimica and Italsilva, respectively—including facial cleansers, shower and hand soaps, laundry detergents, and fabric softeners. The division also manufactures some raw ingredients, such as surfactants. With the addition of the LUX 24, ITS-SISA now has nine packaging lines at its facility.

While Gruppo Desa was certainly focused on cost and speed for the new equipment, it also required a machine that could offer a high-quality package, efficiency, innovation, and flexibility. “Our supplier also needed to be a technology leader,” adds Silva.

Explains Andrea Mathias Pierini, Product Manager at Ilapak, “With Drift Dwell, we have more time at our disposal for filling—from approximately half a cycle with a classic intermittent machine, to four complete cycles—considering it is done during 180 degrees of rotation, on a circular carousel.

“This increased time also allows us to fill a considerable amount of product, maintaining a very competitive production capacity of 200 pouches per minute for a 100-millileter dosage while managing the dosing operation to prevent product leakage from the dosing nozzle or excessive foam.

“The continuous motion also allows us to avoid a waving effect of the product that otherwise could contaminate the top sealing area, compromising the quality of the seal.”

In the second half of the machine, 20 grippers take the pouch from the cutting unit and transport it all the way through the subsequent operations to the outfeed of the machine. “This gripper can have intermittent motion when needed to apply a spout or handle for example, and it can have continuous motion for filling,” explains Pierini. “If the machine is running a simple Doypack without accessories, such as one for shredded cheese, we can run the equipment in continuous motion all around the carousel, almost doubling the production speed.”

Another new technology used in the LUX 24 is a patented sealing system that can apply 2,000 kg of pressure on the sealing profile versus the 600 kg typically used for other Doypack machines. This reduces both the time needed to seal the pouch and the temperature required. In addition, says Pierini, it creates a stronger, more reliable, and more attractive seal.

According to Pierini, the versatility of the LUX 24 is enabled by its cantilevered structure and open-frame design, which allows for visibility of all parts and accessibility from all four sides for cleaning and maintenance. Electronics are positioned on the top of the machine, leaving the bottom clear for easier cleaning.

First half forms and seals
At ITS-SISA, the first package to be produced on the new LUX 24 was a 1.89-L pouch of Chante Clair liquid laundry detergent, bound for the French market. Ilapak, along with the film supplier, specified the pouch material to ensure the greatest stability and seal quality. It comprises a proprietary multilayer adhesive-laminated film, reverse flexo-printed by SCEA in five to seven colors, depending on the product. The pouch includes a spout in the top left-hand corner, and a die-cut handle on the right side.

Pouch making and filling begins with film unwinding from a reel, on top of which is positioned a nip roller. Two load cells on the film roller detect the force applied to the film, allowing the machine to modify the tension between the nip roller and a vacuum chamber that separates the first and second halves of the system. This allows for the correct amount of tension for sealing. A sensor on the reel holder detects the centering of the film for pouch forming, with automatic adjustments made via servomotors.

Once film is fed into the machine, it moves through a punching unit that punches four holes into the film that, during the sealing of the bottom gusset, provide two points of connection between the internal layers of the film. Otherwise, explains Pierini, when the gusset was formed, two external layers of film would come together, which could not be sealed to one another.

After the holes are punched, the film is carried into the forming area, where the film is folded and the gusset created with a triangle gusset plate, in duplex, after which the bottoms of the two “pouches” are sealed. Next, the film moves through the sealing station, where four vertical sealing bars seal the left and right sides of two pouches at one time. The seals are then cooled as they pass through the cavity of a cooling plate.

This ends operations in the first half of the machine. Providing a buffer between the first and the second half is the vacuum chamber, which manages the unwinding of the film for simplex operation. “With this square chamber, we create a physical disconnection of the film between the sealing unit and the cutting unit,” says Pierini. “This allows us to set the position of the eye-mark for the sealer or cutter automatically through the operator panel, rather than the operator having to manually adjust one or the other during format changes. This is a huge time savings.”

Cutting and filling in section two
Immediately following the vacuum chamber, film moves through the cutting unit, which uses a unique rotary system, versus a scissoring movement, to cut the pouches. With this technology, the system is supported on the top and bottom with bearings during cutting, for a consistent and reliable cut. Additionally, it does not require cutting edge registration and reduces wear. After cutting, each pouch is grasped by a gripper that carries it through the rest of the line. For pouches that do not need accessories (i.e., spouts, handles, etc.), the grippers carry them directly to the filler. In the case of the Chante Clair pouch, the next operation is cutting of the corner of the pouch, in preparation for spout insertion.

After a diagonal cut is made to the top corner of the pouch, a vacuum opens the pouch, and a spout—fed to the station in the correct orientation via a traditional sorter—is applied with a servo-driven pick-and-place system. Once the spout has been applied, a sealing bar seals the area around the spout, after which the area is cooled. In the next operation, a pneumatic cutting head die-cuts the handle on the side of the pouch. Next, vacuum cups open the pouch, and a device flushes the pouch with air.

From here, the LUX 24 transitions from an intermittent to a pure continuous motion system, as grippers carry the pouch into the 180-deg carousel for filling. The system uses eight filling heads with nozzles that, according to Pierini, have a larger filling diameter, as the rotary system allows for filling with less pressure, due to the greater cycle time. This enables a greater filling cycle time and reduced foaming of the product.

After the pouch is carried around the carousel, it enters another linear section of the machine where two sealing bars and one cooling bar seal and cool the tops of three pouches at a time in intermittent motion. From here, the pouches are released from the grippers onto a conveyor belt.

At presstime, ITS-SISA was in the process of installing a drop case packer, also from Ilapak, at the outfeed of the LUX 24 for automatic case packing of pouches.

Pushing pouch expansion
Since production of the first Chante Clair pouch, Gruppo Desa has run four more liquid soap SKUs, including Spuma di Sciampagna brand products, in 550- and 200-mL sizes, at speeds up to 90 pouches/min. According to Silva, changeover of the machine requires minimal manual and electronic adjustments that “in the worst case” take about three hours.

At present, rigid bottles still make up 95% of Gruppo Desa’s packaging, but Silva says that within three years, the company hopes to increase the share of its pouch sales to 25%. “The eco-friendly pouches will give us the opportunity to save in terms of the weight of the package—around 50-percent less than bottles—and in transport and storage of the packaging, as the pouches arrive in rollstock, whereas bottles are full of air and require around 75-percent more space for storage and transportation.

“These pouches embody a lot of concepts for consumers—the ecology, user friendly, less expensive, less space. Our marketing has always focused on ‘claims,’ and this kind of project offers a new range of them.” 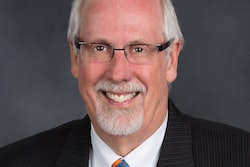 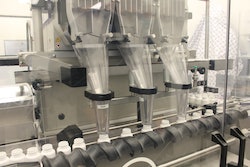 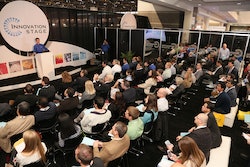