Ball takes control during can testing 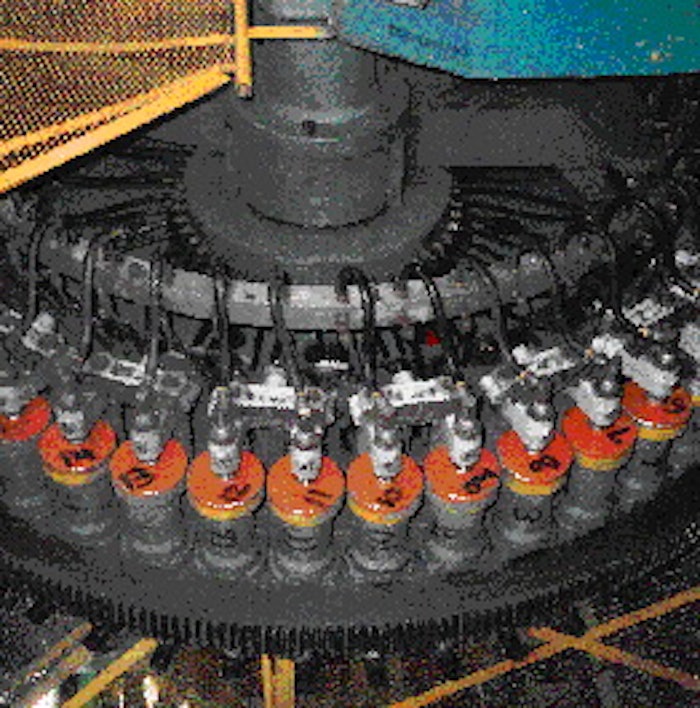 As Ball?s air-pressure tester revolves (above), a microprocessor-based controller monitors each of 48 can-containing stat

Can integrity is a top priority at Ball Corp.'s Columbus, OH, plant. To make sure its three-piece steel cans don't leak, the venerable container maker is using new controllers on the leak testing machines on two separate can lines. In mid-'95, Ball added a prototype MD20 (Memory Display) leak tester controller from Hyde Park Electronics (Dayton, OH) to a 48-station air-pressure tester from Randolph Machinery Operations (Randolph, NY), a division of Alcoa Packaging Machinery. Since then, another MD20 has been added to a second line. More widely recognized for its sensors, Hyde Park has produced controllers for several years. The MD20 advances the control technology of earlier Hyde Park controllers, such as the MD3's that were replaced by the MD20's on the two Ball lines. "We agreed to add the prototype on our air pressure tester carrier wheel to see how it worked," recalls Franz Tummel, Ball's Columbus plant maintenance mechanic. "This MD20 is more computerized, and gives us more control over our testing process. It has a control panel and display terminal that indicates the status within each of the 48 stations, or 'pockets' as we call them." The microprocessor-based integrated MD20 combines three separate functions that previously required different controllers: no can/no air controller, pressure sensor amplifier and memory display. The advantages of these functions become evident during the can testing process. Once the manufacturers end is seamed to the welded can body, the cans proceed single-file at speeds of around 600 cans/min. Cans twist through an overhead conveyor, then reach a starwheel and infeed worm that transfers each can into one of 48 pockets on the revolving Randolph air tester. The open end of the can is positioned tightly against a rubber boot. This essentially "seals" the can to the boot. The pocket goes over the can and is also affixed to the rubber. The no can/no air controller detects the presence of a can within each pocket. Once the can is detected, between 5 and 10 psi of air is injected through a vent into the open can end--not into the outer pocket, which remains at atmospheric pressure. Without the no can/no air controller, air could be released into the pocket. That could potentially damage the unit. A leaking can would allow air to escape into the outer pocket where a transducer would then detect an increase in air pressure. In turn, the transducer produces an electrical spike. The larger the leak, the stronger the spike. This spike is transferred through a cable to the pressure sensor amplifier. The memory system stores this signal until the wheel has revolved to the point where the leaking can is discharged via a diverter and into a box adjacent to the line. By combining these three key functions into the MD20, the need for spare parts for separate controllers is greatly reduced. Another MD20 advantage compared with the MD3 is that the MD20 creates a set of numerical values that indicate good or defective cans. For example, a reading within a pocket higher than the targeted "good" range would indicate a leaker, while an unusually low air pressure reading could indicate an air supply problem. The MD3 would simply reject a can without giving the operator a clue as to the problem's origin. The MD20 also provides a handy display that allows operators to acquire key information such as total number of cans tested/rejected, rejects per pocket, and pressure readings within each pocket. "The MD20 gives us more control over the critical points of our can testing process," says Tummel. "For example, we can adjust how quickly our rejectors fire, and we can identify problem pockets that may be worn down. This helps us cut down on troubleshooting time. "Most importantly, we can quickly determine leaks. We can monitor the operation while the line runs 24 hours a day, seven days a week." Ball's satisfaction with the controller is best demonstrated by its plans to add a third MD20 in the near future at the Columbus plant.