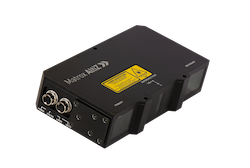 Matrox’s 3D profile sensors features an optimized design that greatly lessens scanning gaps. Simultaneous viewing of the laser line by the Matrox AltiZ’s two opposed optical sensors reduces optical occlusions—frequently encountered at critical surface junctures—caused by the laser line being obstructed from the view of a single image sensor because of a surface’s orientation.

Matrox AltiZ stands apart from other sensors in terms of there dual optical-sensor design and data-fusion capability, which offers higher 3D reproduction fidelity through their ability to combat occlusion and outlier data. They delivers high levels of control over spurious data, providing more robust reproductions than achievable with other models on the market.

Whether mounted on the end of a robot arm or fixed to a gantry overlooking a conveyor, the Matrox AltiZ deliver superior reproductions of a 3D object or scene. Data is represented as individual profiles, a depth map, or a point cloud.

The integrated image sensors of the Matrox AltiZ can work in either synchronized or alternate fashion. In synchronized mode, this 3D profile sensor achieves maximum reproduction quality and robustness; configured in alternate mode, the Matrox AltiZ’s scanning rate is almost twice that of the synchronized configuration while still providing key defense against occlusion.

Regardless of the configuration chosen, the Matrox AltiZ is ideally suited for inspection tasks, delivering two powerful cameras within a single compact enclosure, and an IP67 rating ensuring its performance in tight spaces and harsh industrial environments.

Matrox AltiZ will be officially released in Q3 2020.

Cognex introduces the 3D-A1000 Item Detection System, a motion-capable smart camera that can identify the presence or absence of objects on all types of sorters traveling at production line speeds.
Cognex Corporation
Aug 13th, 2020

Beckhoff's Dr. Karl Weber is the first representative from EU appointed to the IEEE Committee. He will represent the German Federal Ministry in the international Government Engagement Program on Standards
Beckhoff Automation
Aug 6th, 2020

Nanotec expands its line of BLDC motors with the DFA90 external rotor motor with a rated power of up to 170 W and a diameter of 90 mm.
Nanotec Electronic
Aug 3rd, 2020

Fanuc was named Supplier of the Year by General Motors. This is the 16th time Fanuc has received the award.
FANUC America
Jul 27th, 2020

Bosch Rexroth will host a free 4-day virtual event July 13-16 that will discuss the Factory of the Future.
Bosch Rexroth
Jul 7th, 2020

Antares entered into a five-year agreement with IMA whereby it becomes the exclusive supplier of all IMA inspection and tracking technologies.
Antares Vision
Jun 18th, 2020