Needs include workers who can operate today’s high-tech equipment for plastics production, robotics, and automation. 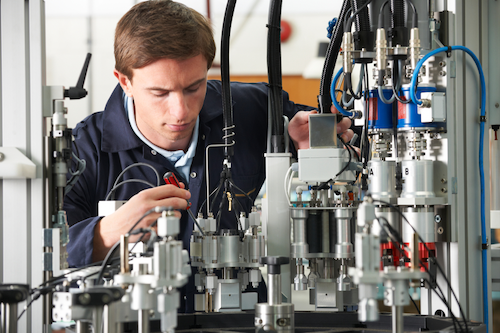 In this photo, an engineer works on complex machinery. Manufacturing’s resurgence creates demand for skilled technicians

“Plastics and packaging manufacturers tell us there are two main factors. The myth of cheap manufacturing in China has been shattered. Also, consumers in stores are looking for the ‘Made in USA’ label,” says Dennis Gros, President of Gros Executive Recruiters, an executive recruiting firm that focuses on serving companies and individuals in plastics and packaging.

Manufacturing’s rebirth in the U.S. isn’t just a temporary illusion. It is being driven by inexpensive energy costs in the U.S. from the shale oil boom, and jobs coming back from overseas.

The Reshoring Initiative estimates that companies brought 100,000 manufacturing jobs back to the U.S. in the last four years. And a survey by Grant Thornton in late 2013 found that more than one-third of U.S. businesses planned to move goods and services production back to the U.S. in 2014 to improve costs, quality, and delivery times.

That resurgence in manufacturing has boosted employment in the plastics and rubber industries back to where it was in January 2009, with many of those jobs increasingly high-tech in nature.

Specifically there has been an increased demand for computer-controlled machine tool operators for plastics production, and skilled workers with advanced degrees and knowledge of robotics and automation.

“In recent years, the IT (information technology) jobs have attracted the bright, young minds,” says Gros. “Now that domestic manufacturing is in the midst of a renaissance, we will be in a better position to compete against IT for talent.”

Bosch Rexroth will host a free 4-day virtual event July 13-16 that will discuss the Factory of the Future.
Bosch Rexroth
Jul 7th, 2020

Antares entered into a five-year agreement with IMA whereby it becomes the exclusive supplier of all IMA inspection and tracking technologies.
Antares Vision
Jun 18th, 2020

The automation supplier went back to the drawing board to create ctrlX Automation, a software-driven open automation platform that provides flexibility and scalability through app-based functionality.
Aaron Hand
Jun 4th, 2020

The Siwarex WP351 module is Siemens’ newest solution for intelligent weighing automation for a wide range of applications in pharmaceutical, food and beverage, chemical, and steel industries.
Siemens USA
May 20th, 2020

Wago’s Pro2 power supplies units include six sizes ranging from 120 to 960 W with an energy conversion efficiency up to 96%.
WAGO Corporation
May 18th, 2020