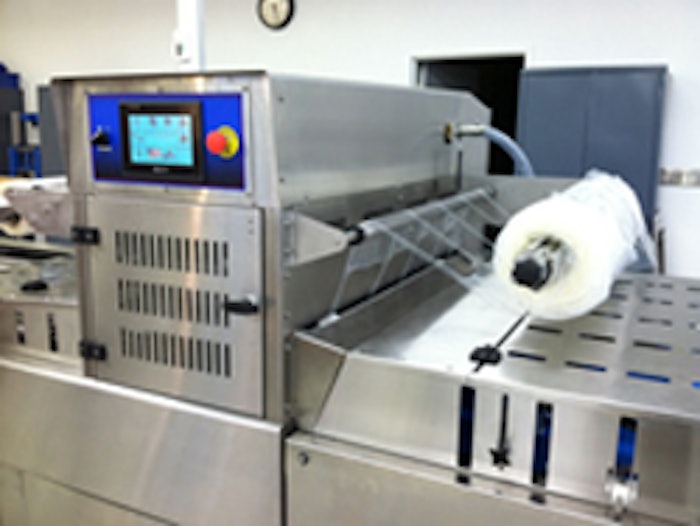 According to UltraSource Chief Engineer Jim Harte, the film-handling system he and his colleagues wanted to avoid is one that advances the lidding film through the machine by pulling on the scrap matrix that’s left after lidded trays are cut free from the lidding material. (This matrix is seen in the photo shown here.) They’d seen that approach prove unsatisfactory on other tray-sealing machines because when the flimsy matrix breaks, as it too often does, production is slowed or halted as the ability to pull the material reliably is compromised.

Instead, the Rhino 12 uses a stepper motor from Anaheim Automation and stepper drive from Applied Motion Products to feed lidding material into the machine. Thus, the lidding material is not pulled from the opposite end of the machine but rather is advanced smoothly and reliably, independent of the matrix rewind. On the opposite end of the machine, the rewind mechanism that takes up the matrix is powered by a Baldor DC gear motor and a KB Electronics DC drive. All of these controls components are governed by a Mitsubishi FX Series PLC.

“We control the amount of torque on the matrix rewind with the PLC,” says Harte. “If the operator sees that the matrix material is being pulled too much or too little, he can go to the PLC and adjust the torque there. A digital analog converter signals the KB drive to back off or increase torque. Also nice is that as that Baldor DC gear motor is pulling up slack, if the slack is eliminated that motor will automatically stall. It won’t keep pulling when pulling is not needed. We call it electronic tension control.”

When I asked Harte how unusual it was to marry a stepper drive from Anaheim Automation to a stepper motor from Applied Motion Products, he answered this way.

“As an OEM you have to be willing to do that a little bit to get the right thing in the right place at the right cost. Because the first thing a prospective customer asks is what does this machine cost? I sent Applied Motion the Anaheim motor, and Applied Motion did all the measurements and set up all my parameters for me. We use that ST10-S drive in a lot of equipment we make. In this case I needed a gear motor, and Anaheim was the only one I could find that makes a stepper gear motor at a reasonable price. So the bottom line is that in this case at least, Anaheim and Applied Motion were willing to work with each other. Keep in mind these are stepper motors we’re talking about here. With servo motors it’s a different story.”

A young craft brewer in New York’s Hudson Valley was maxing out the capacity of its 25-hL brewhouse. A second, larger brewhouse from Krones Steinecker was highly customized to handle its hoppy brew.
Aaron Hand
Mar 8th, 2022
More in Controls & automation