Case packer’s precision control a function of its gearboxes 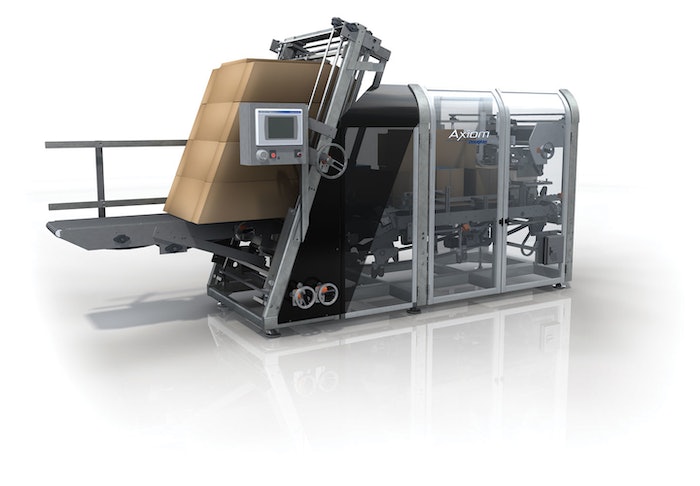 Custom input adaptors are among the features that distinguish the new gearboxes.

The Axiom IM Series of case/tray packers from Douglas Machine deliver speeds to 45 cases/min with servo-controlled precision. The servo motors are from Rockwell.

Recently, Douglas began specifying a servo gearbox from Lenze to perform the task of changing the servo motor’s rotary motion to linear motion, which permits actuation on the machine. Depending on the application, an Axiom machine could have on it as many as 15 motor/gear box pairs. The gearboxes are made with custom input adaptors made specifically for Douglas, says Douglas engineer Annamalai Pugalumperumal.

“We looked at Lenze’s standard offering of gearboxes, but they didn’t really fit right,” says Pugalumperumal. “It looked odd, for one thing, but it was more than a matter of looks. The input coupling part was sticking outside of the gearbox itself. So in mounting it against the conveyor side frame, the gearbox would have been protruding way outside. Together with Lenze, we designed the input coupling really flush with the gearbox.”

Maximum control over flap folding is crucial in a machine like the Axiom. Flap traps and minor flap tuckers are servo driven to control their speed and timing. The servo-driven flap traps operate consistently at all speeds to capture the case during setup, one of the most critical areas affecting efficiency. Precise control of tucker speed and timing is the best method for folding at the flap score line.

“High efficiency and low backlash is what these gearboxes offer,” says Steve Greene of Lenze. “When you want to stop an action, there can be some play in the output shaft of the gear box. Not so with these gearboxes. They have excellent stopping accuracy.”

Elsewhere on the Axiom machine, four-corner case control squares the leading and trailing walls of the case just prior to case sealing and compression. Here again, servo control of the squaring guarantees precision.

Mary Ellen Kerber, marketing services manager at Douglas, points out that as this design work behind the special Lenze gearbox moved forward, Lenze did a good job of sharing technical data along the way. “When we implemented the change to Lenze gearboxes, there were issues of course, but that’s to be expected,” says Kerber. “Lenze stepped up and worked hard to make sure necessary changes were made.”

Pugalumperumal adds that the communications protocol on the Axiom machine is Ethernet IP. “The whole U.S. market on the packaging side is shifting to Ethernet IP,” says Pugalumberumal. “The main reason is that once I assign an Ethernet IP address I can pretty much hook it up to my device and I can communicate to it right away without needing a special adaptor or software package.”