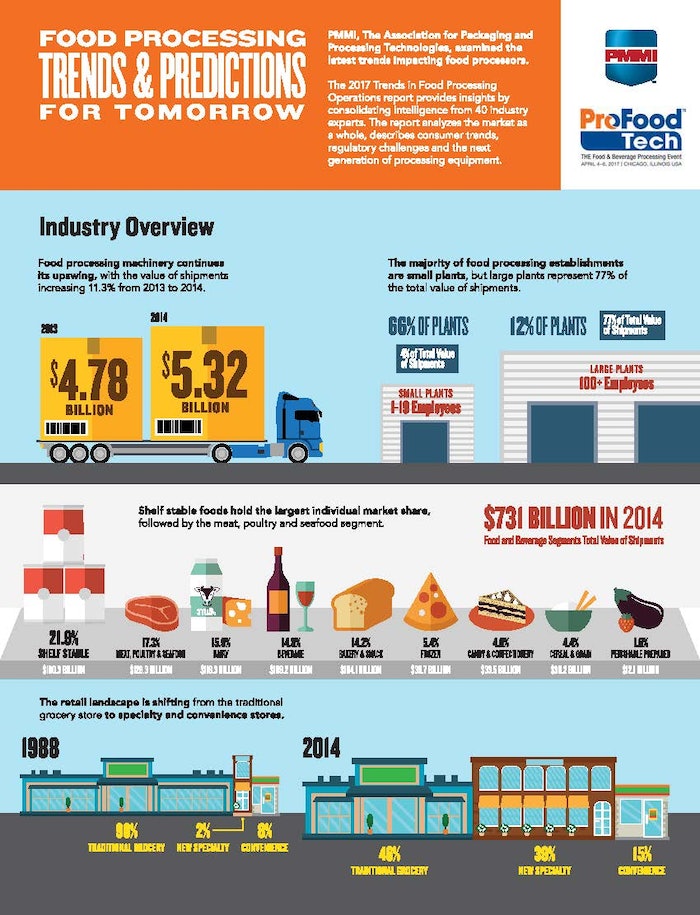 Powered by three of the world’s trade show leaders – PACK EXPO, Anuga and the International Dairy Foods Association (IDFA) – and positioned as the most comprehensive food and beverage show in North America, ProFood Tech was launched to meet the demands of this growing market.

“Markets, channels and technology are changing the way consumers will purchase and consume food in the future,” says Jorge Izquierdo, vice president of market development for PACK EXPO producer PMMI. “Over the next fifteen years expect to see significant changes to food manufacturing and sourcing, such as shorter supply chains because of transportation expense, growth of local production, benefits of microtechnology and nanotechnology for more sustainable production of food and improved taste, as well as stronger competition for land use as food, fuel and fiber battle for space.”

Currently, the industry is served by a relatively small amount of global producers that span multiple food verticals and channels. Cross-border investments are merging some of the world’s best known food brands in order to achieve growth. The majority of food processing establishments are small plants, but large plants represent a higher percentage of total value of shipments. While small plants accounted for 66 percent of all food processing establishments and large plants accounted for 12 percent, 77 percent of the total value of shipments is represented by large plants while small plants represent only four percent.

The food and beverage segments total value of shipments was $730 billion in 2014. Shelf stable foods hold the largest individual market share (21.9 percent), followed by the meat, poultry and seafood segment (17.3 percent). The retail landscape is shifting from the traditional grocery store to specialty and convenience stores. For example, in 1988, 90 percent of the retail landscape was represented by traditional grocery stores compared to 46 percent in 2014.

Consumer demand for convenient and healthy food options continues to impact food processors. New product launches with plant-based claims have increased almost seven-fold since 2011 and organic products have seen a 25 percent increase in sales since 2012. Packaged food companies are increasingly turning to snacks as an avenue for growth and nearly 60 percent of new snack launches were positioned as healthy in some way.

Food manufacturers predict an increase in automation and robotics due to a need for more flexible machinery to run manufacturing lines more efficiently. Sixty-three percent of companies that participated in the study are actively exploring new processing technologies to improve food quality, eliminate contamination and prolong shelf life and nearly half of the participating companies expect to increase spending on equipment in the next two years.

Processors can look to source much of this technology at the fast approaching ProFood Tech. This biennial show in Chicago is unprecedented in its ability to bring the industry together and address the key issues facing food and beverage processing operators and is the only event in North America focused exclusively on all food and beverage sectors.

Listen to the unPACKed with PMMI podcast as Laura Thompson breaks down the significant competitive advantages that attendees and exhibitors will obtain from the show.
Sean Riley
May 19th, 2021