Robotic palletizing of 5-gal plastic buckets of paint is just one of the highlights of four new packaging lines in the brand new Phoenix plant of Los Angeles-based Dunn-Edwards Paints. Built by ABB and installed and integrated by Systems Automated, the robot’s vacuum-gripper end effector picks up four buckets weighing a total of 220 lb with each cycle and places them on pallets at speeds to 44 buckets/min. The system’s speed and flexibility, the weight of the load being palletized, and the dexterity of the end effector all add up to a pretty impressive example of what robotic technology can bring to the packaging space.

Dunn-Edwards is the leading manufacturer and supplier of architectural and industrial coatings in the Southwest. It recently consolidated all of its water-based manufacturing and distribution operations in its new Phoenix facility. The firm sells most of its paint through its own stores, all 109 of which are located in the Southwest.

Because the robotic palletizer is capable of such high speeds, Dunn-Edwards is able to feed two identical filling lines into it. Each of these lines begins with automatic denesting of the high-density polyethylene buckets, performed by a machine from Heisler Industries. An operator takes a stack of 20 nested buckets and places it on an infeed conveyor. The denester does the rest. The stack is tipped on its side so that buckets can be mechanically separated from the stack and fed—after being uprighted again—to the labeler.

Application of a cold-glue-applied paper label is done by a Heisler Industries machine. Once labels have been applied, a pneumatic pusher divides the single lane of buckets into two so that the buckets can file into the two lanes of the inline, four-head AB netweigher from PASE Group. Two buckets are filled at a time. While the two in the left lane are being filled, the two on the right are discharged and two empty ones take their place.

The filler features pressure-over-product filling. Rather than a more conventional approach involving a manifold and a pump pushing product through modulating valves that then steer the product to each filling nozzle, the filler relies on a blanket of low-pressure air over the product in the tank. It’s the air pressure in the tank that pushes product out of the nozzles. When the net weigh scale determines the proper target weight has been reached, the nozzles close and the bucket is discharged. Accuracy, says PASE Group, is plus-or-minus a quarter of a percent.

“What we like especially about pressure-over-product filling is that you don’t get surges in paint flow,” says Clay Fenstermaker, director of engineering at Dunn-Edwards. “Those surges are what make accurate filling more difficult.”

The filler also includes four cylinders through which 6 oz of “topping solution” are added to each bucket so that the latex paint won’t form a skin on the top.

A short distance fom the PASE filler is another Heisler machine, a continuous-motion roller lid press that compression presses HDPE lids onto buckets. Then the buckets pass through an inspection device from Heisler to ensure all lids are firmly seated. A second inspection camera, from ifm, makes sure none of the lids is missing its tint plug. (This is a rubber stopper that the store personnel remove in order to add the tint that gives the base paint the final color desired by the home-owner or contractor buying the paint. The plug is then replaced and the bucket is shaken to disperse the tint.)

Following the imprinting of SKU and batch number on the lid, which is done by a Domino Amjet (www.domino-printing.com) ink-jet system, the buckets are ready for palletizing in a three-layer pattern with 12 buckets per layer. The ABB IRB 660 robot sits between the two conveyor sections on which filled buckets reach the palletizing cell. The vacuum-gripper end effector picks buckets from the left conveyor and puts them on a left pallet or from the right conveyor for placement on the right. Each side has a magazine of empty pallets so that a fresh pallet can be fed in automatically whenever it’s needed. Systems Automated engineered and integrated the pallet dispenser and the zero-pressure zoned accumulation conveyor that indexes buckets into the palletizing cell.

“The big driver on this part of the line was rate capability,” says Fenstermaker. “Originally we were thinking about an overhead gantry robot solution because we were unsure about one articulating robot being able to handle both lines. But as part of the initial engineering contract, the integrator used some ABB software to do a nice simulation showing the full robot movement in real time and a good computer model showing us this robot packing at the rate we needed. Also at issue was the vacuum-cup end effector’s ability to hold four of these heavy buckets. But the integrator sent us a video of a similar installation where the same kind of end effector was successfully whipping a similar payload all over the place. In the end we were convinced this was the way to go.”

One other area of special concern revolved around the tint plugs in the lids, says Fenstermaker. “The concern was that the lid vendor might fail to insert a plug in every single lid and the end effector would suck paint out through the plug-less hole. But the inspection system from ifm takes care of that possibility, unlikely though it is. The other worry was that the vacuum exerted by the robotic end effector could suck the tint plug out. But this hasn’t been a problem, either, partly because the end effector has a thick foam pad that both disperses vacuum pressure over the entire lid and makes the system relatively insensitive to minor height variations in the buckets.” Also contributing is a Venturi Vacuum system that carefully regulates vacuum pressure so that it’s strong enough and evenly dispersed enough to grip the buckets without dislodging the tint plug.

The final pieces of equipment on each line are a stretch wrapper from Wulftec and a thermal-transfer print-and-apply pallet labeler from Videojet. “We’ve had some previous experience with Wulftec and we liked their equipment and their pricing,” says Fenstermaker.

As for the printing on the pallet label, it represents a step forward in inventory management for Dunn-Edwards.

“Each label includes a unique transfer request number that’s printed as a linear bar code,” says Fenstermaker. “This ties into our ERP [Enterprise Resource Planning] system. When the forklift driver scans that bar code, he automatically knows exactly which pallet location in the warehouse that pallet belongs in. That information is also sent automatically to our inventory management system, so we know automatically, without having to keep track with paper and pencil, where each pallet from each batch is located. It’s a big help in managing first-in/first out inventory and in bringing a new level of accuracy and efficiency to picking for shipments along with our overall inventory management.”

Like the robotic palletizing cell, it’s one of the reasons Fenstermaker believes that this might be the most sophisticated 5-gal paint bucket packaging line in the world. 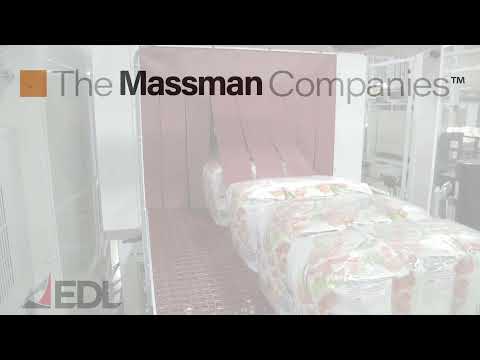 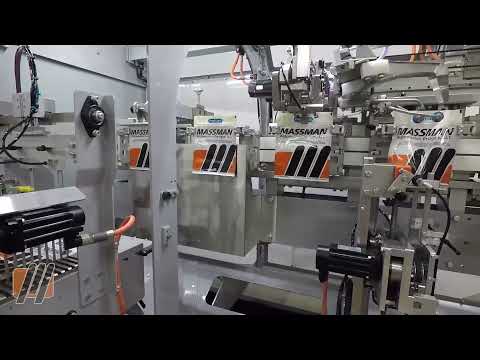 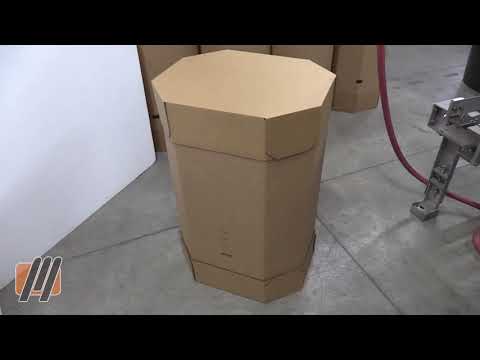