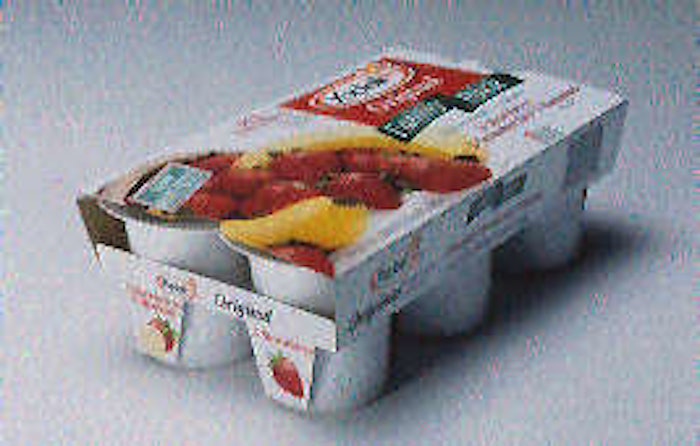 "Our customers - grocery stores - were requesting something more compatible with their shelving." he says. Like its four-and eight-count predecessors, the new six-pack is known as the Yogopack®, supplied by Mead Packaging (Atlanta, GA). It presents cups single-layered instead of stacked two-high as they were before. According to Mead, it reduces paperboard use by 1/3 compared to Yoplait's previous, full wraparound multipacks, with no loss in package integrity. Also, adds Wagoner, the single layer of cups allows greater stacking flexibility on store shelves. Increased billboard space on the front panal and the addition of side panels heighten product identification. Constructed of Mead's Custom Kote® coated natural kraft paper, it's offset printed by Mead in five colors with a varnish. The new multipack was introduced last September with a retail price of about $2.49.

Based on online clicks and unique page views, we are counting down the Top 10 articles of 2021. Check out this March 2021 article, topping our countdown, on a durable, reusable packaging that can be returned for refill and reuse.
Jan 2nd, 2022
More in Home