The new marketplace allows turnkey applications to be installed on any CtrlX CORE unit. 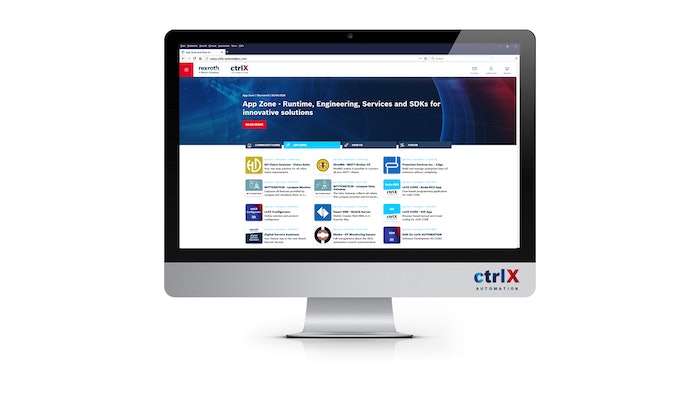 The ctrlX Store features applications developed by Bosch Rexroth as well as a growing number from third-party providers. According to the company, the primary goal of the marketplace is to help machine builders, packagers, and other manufacturers speed time-to-market while maintaining the ability to customize their offerings and differentiate themselves from their competitors. By making an ecosystem of turnkey applications available, the challenges that come along with configuration, programming, and design when setting up a line or engaging in product changeover can be greatly reduced. Moreover, to enable as much flexibility as possible, end-users writing their own applications can do so via a variety of programming languages or utilize low-code methodologies such as Google’s Blockly visual programming environment.

According to Dave Cameron, director of sales at Bosch Rexroth, as innovation increasingly occurs at the software level, platforms like the ctrlX Store will enable companies to quickly install updates remotely, allowing them to keep their businesses competitive more easily than if physical upgrades to hardware assets were needed.

The open availability of schematic and configuration data the ctrlX Store offers also enables end-users to begin programming applications for new equipment via a computer-aided design (CAD) simulation before machinery has even been put in place, further accelerating the production pipeline.

The ultimate aim of the ctrlX Store is to bring a “smartphone principle” to the sharing of industrial software and applications. In lieu of requiring end-users to write custom applications line-by-line, an open ecosystem approach allows them to access large libraries of pre-existing code, which can greatly ease the process of digital transformation.