Explaining how the ctrlX Core serves as the control system of ctrlX Automation platform, Schmidt said, “It's available as a stand-alone device or integrated into an industrial PC or a ctrlX drive.”

For the demo, he used the drive-based version to show how the ctrlX platform can be used with ctrlX drives to save space. The drives used by Schmidt were a 70kW peak converter drive and a dual access inverter drive powered by the converter using built-in DC bus connectors. “Many additional drives can be stacked in this way with no additional wiring or accessories needed to distribute the power,” he said. “And the drive family can handle a wide range of applications, with drives ranging from half a kilowatt to 110kW continuous power and up to 210kW of peak power.”

Schmidt pointed out that, regardless of whether you use ctrlX as a stand-alone device, integrated into an industrial PC, or a ctrlX drive, “the look and feel and programming is exactly the same, regardless of the hardware platform.” 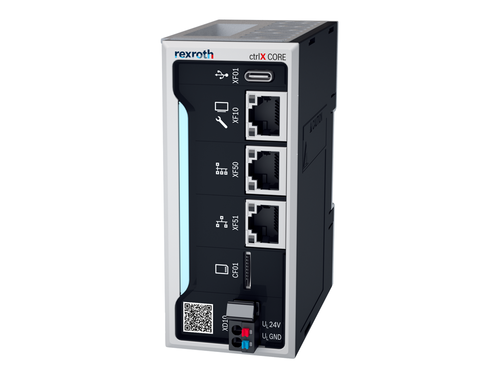 The ctrlX Core serves as the control system of ctrlX Automation platform. It is available as a stand-alone device or integrated into an industrial PC or a ctrlX drive.Explaining how ctrlX Works operates via the use of app technology to add capabilities to the ctrlX Core, Schmidt said users can build and expand functionality of a device by adding apps, much like you do with a smartphone. “You don't need to install any software on a PC to operate it, ctrlX Works can connect with a laptop, tablet, or smartphone—any device with a web browser.

Navigating to the apps area of ctrlX Works on his screen in the demo, Schmidt highlighted how the concept of customizing control by installing apps is fundamental to ctrlX Automation. “The idea is that if you need motion control, you can install a motion app. If you need a PLC, you can install a PLC app. There are also apps for different programming environments, like Node-Red and Python, as well as apps for IoT (Internet of Things). And all the functionality that's needed from the app is built into a single file. So it's very flexible in terms of adding the functionality that you need and using it for more than just machine control.”

In his explanation of how to use the motion app as an example of the ctrlX platform, Schmidt showed how to add axes of motion to the system. “If I want to add an additional axis, I go into configuration mode, hit the plus button to add the axis, click the play button to go back to running mode, then access commissioning and start jogging the axes. With this, we can test out motion and the mechanics of the system without having to run any code.”

Schmidt also demonstrated similar functionality for robot kinematics. For this, he added an app for a cartesian robot and assigned the X, Y, and Z axes of motion for the three dimensions of the cartesian system. “Similar to the motion app, we have a kinematic commissioning tool which allows us to jog the robot or send it to pre-defined target positions,” he said.

The built-in robotics features in the ctrlX platform include point-to-point positioning, linear and circular interpolation, and blending to allow for rounding corners and more efficiently moving objects. “We can also define areas in which the robot is permitted to move or not, and we can also synchronize the robot to objects moving out of a conveyor,” said Schmidt.

According to Bosch Rexroth, the ctrlX Automation platform supports all common open protocols and interfaces through more than 30 direct connection options and communication standards, including OPC UA, time-sensitive networking, and 5G. The ctrlX data layer ensures that real-time and non-real-time data exchange is shared across domains.

According to Bosch Rexroth ctrlX Automation cuts engineering time and effort by 30-50%, significantly reducing time to market for new machines.