The new FDT 3.0 standard and developer toolkits are secure, scalable and platform-independent, enabling remote access to device and network data across the enterprise without PLC/DCS host intervention. 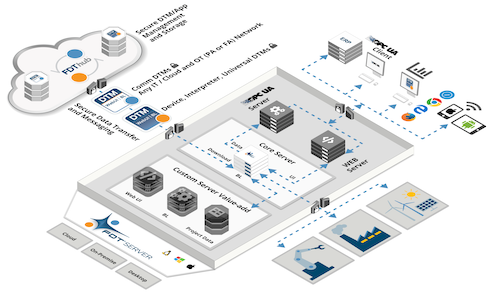 The Industrial Internet of Things (IIoT)  is changing the automation landscape in terms of how data is being shared in the plant and enterprise. As part of that, manufacturers want open integration and standardized devices in the form of a data-centric model that can offer up information to the operations and business systems that need it. Companies also need mobility, scalability, security, remote access, and backward compatibility.

Now, more than ever, there’s a need for a platform to support a next-generation architecture that scales from sensor to the cloud and that will allow secure mobile field device management and improved workflow for plant workers. And FDT Group is delivering it.

The FITS Server architecture has removed all of the Microsoft Windows desktop dependencies found in earlier versions of the FDT standard so that it now works with Apple, Linux, as well as Microsoft environments, allowing users to pick the platform that is best for their enterprise.

Other new features include:

In addition, the group rolled out the FDThub repository for FDT Device Type Managers (DTM), which is the software component that works on the device-specific data, functions, and rules. The hub, which can be in the cloud or on-premise, is where certified DTMs are stored and managed by giving the vendor community access to it.

“This is probably the number one request from end users,” said Glenn Schulz, managing director, FDT Group, in a virtual press conference. “They want the DTMs, they like the features they provide, they just didn’t want to visit all the different vendor websites to find the DTMs that they needed for the facility, so we addressed that directly with the hub.”

But it’s not something the end user goes to browse. Rather, if a server is in need of a DTM to support the devices on the network, the server automatically logs into the FDThub, retrieves the DTM it needs and makes it immediately available to end users. “So the end user sees this as completely transparent to them, it is available to them without having to do any real interaction with the FDThub,” Schulz said.

As a single server environment, FITS can handle a plant, an entire enterprise, or could scale down to a single skid.  For example, “We see the skid-type application as something like a bottling line manufacturer which delivers a bottling line to their end customer and they are charged with making sure the line is available and operating at high efficiency,” Schulz said. “So they could put a small version of the server on a Linux application buried inside of the bottling line and monitor the health of all the assets, make adjustments as necessary, and develop KPIs, dashboards, and so on, in that application. And it all scales up to a cloud based environment.”

To develop products in the FDT 3.0 standard, there are IIoT-ready common components, which  are development toolkits, including FDT Server, FDT Desktop for a standalone installation, and FDT DTM device drivers.

“We don’t want developers spending all their time learning the nuances of the standard to develop a DTM, we want them to spend time doing the value add for their product,” Schulz said. “Developers are free to innovate and add unique capabilities to any of the common components.”

After developing a DTM, it must be certified so there’s a tool called dtmInspector that can do a run of the DTM to make sure it passes the requirements. The vendor then contracts with an authorized independent test lab to repeat the tests and once they have indicated to the FDT office it has passed all the requirements it is certified and automatically uploaded to the FDThub to make it available to all server and desktop applications.

The FDT 3.0 architecture includes integration of all industrial networks in one project use. For example, connecting HART to Ethernet is handled within the standard, which seamlessly tunnels through all of the networks to talk with the device. It’s scalable, and the FDT Server sits at a peer level with the PLC and DCS environment, so none of this data has to pass through those systems. It can securely get all device data throughput the enterprise without any special coding or authorization from the PLC or DCS. “This is a wealth of data that immediately becomes available to both IT and OT sides of the organization,” said Schulz.

And for the systems and device suppliers, the standard can enable innovative business models, like FDT-as-a-Service where they pre-deploy multiple instances in the cloud and set up a hosted service and project structure for facilities with all of the devices and networks pre-populated. So the customer realizes a complete turnkey system without having to touch any of the infrastructure themselves.

FDT 3.0 specification license agreements and developer toolkits are now available on the FDT website (www.fdtgroup.org). In addition to the FDT 3.0 standard and developer toolkits, an IO-Link Interpreter DTM is under development along with FDT communication annexes for HART, Profibus, IO-Link and CIP networks slated for release in the latter half of 2020.

Learn what attributes consumers value in sustainable packaging and their willingness-to-pay for those attributes to develop a strategy that results in profits.
Jun 30th, 2020