Eight axes of servo-based motion are tightly controlled and synchronized by an integrated motion and logic solution. 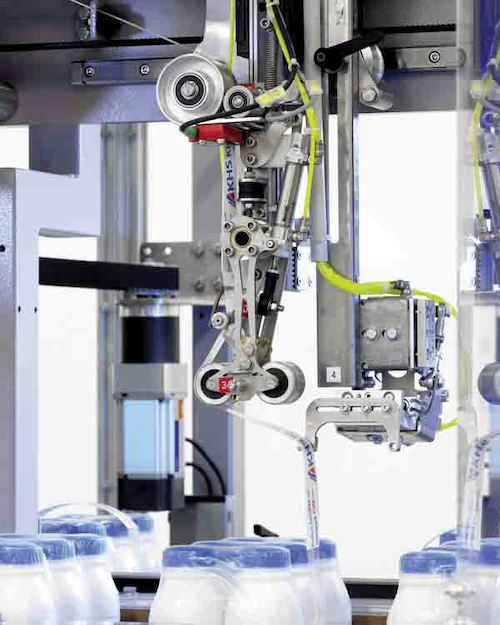 Maximum flexibility with no loss in throughput is what KHS AG (www.khs.com) required in its new line of flexible-film handle applicators. It met its machine-building objectives by specifying a controls package from Bosch Rexroth (www.boschrexroth.com).

Called the Innopack CSM, the KHS machine pulls a strip of sturdy flexible film from rollstock and cuts and glues it to the shrink film that holds bundled bottles together. This makes it easy for consumers to carry a bundle of bottles out of the store and into their homes.

The need for flexibility stems from the fact that the beverage manufacturers who buy and use such a machine are constantly adjusting the number of bottles in a bundle and/or the height of the bottles themselves. The Innopack CSM’s combination of servo drives and integrated motion/logic control lets the beverage company make adjustments with the press of a button at the HMI screen.

Though the KHS series includes single-, double-, and triple-lane versions, the photo shown here is the double-lane machine, which has a rated speed of 100 cycles/min/lane. Each application head (only one is shown here) relies on two servo drives to trigger two servo motors that advance the carrier material and apply it to the bundled bottles as they are conveyed through. The material is cut to the precise length called for by a pneumatically activated knife; pneumatic components, including a compressed air-processing system, are also from Bosch Rexroth.

Four additional servo drive/motor combinations are incorporated in the eight-axis double lane system. Two handle the conveyor belts on which the bundled bottles are carried and two actuate the laminator devices that can be used to affix paper or plastic promotional labels to the carrier strips. All servo motors are from Rexroth, as are their associated EcoDrive Cs drives.

The control platform uses the Rexroth Indramotion for Packaging Advanced set-up, an open-architecture automation system that supports all standard fieldbuses. In this particular line of KHS machines, Profibus-DP is the fieldbus that was selected.

Dirk Langanki, manager of electric construction and development at the KHS packaging technology competence center, appreciates the controls solution provided by Rexroth. “The mechatronic overall concept of the Innopack CSM using servo technology guarantees a high level of flexibility in the production of handles for different sized multi-packs,” says Langanki. This is precisely the kind of equipment, he adds, that today’s beverage manufacturer is seeking.