In a demonstration with partner Robotiq, Universal Robots shows how its new UR20 cobot can address U.S. and Euro palletizing operations.

Earlier this, year, Universal Robots announced the arrival of its newest 6-axis collaborative robot (cobot)—the UR20. The UR20 is Universal Robots’ highest payload, longest reach robot to date. And at PACK EXPO International, it’s capabilities in palletizing applications are being highlighted as part of Robotiq’s palletizing system. Robotiq is a UR partner company.

The demo in Universal Robots' booth (N-4925) highlights the improvements in UR cobot performance made possible with the UR20, such as improved overall motion control capabilities and a more than 30% increase in speed and torque.

Key features of the UR20 include:

Anders Beck, vice president of strategy and innovation at Universal Robots, notes that the UR20 is not just a bigger version of existing UR cobots, its new joint design increases all joint torques by approximately 25% and joint speeds by as much as 65%. The UR20 also features an increase in tool center point of 100% (2 m/s vs. 1 m/s).

Updated software for the UR20 delivers smoother motion, which is especially beneficial for dispensing applications. It also causes less wear on the joints for increased uptime and decreased maintenance.

The UR/Robotiq palletizer system operates via a standard single-phase power outlet (110-220 V AC) for ease of deployment in any facility. 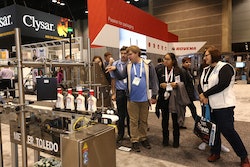 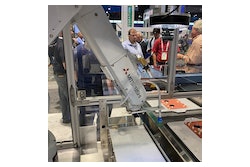 Automation Add-ons by the OEM 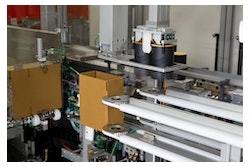